COMNEN — Connecting the future with heart！ 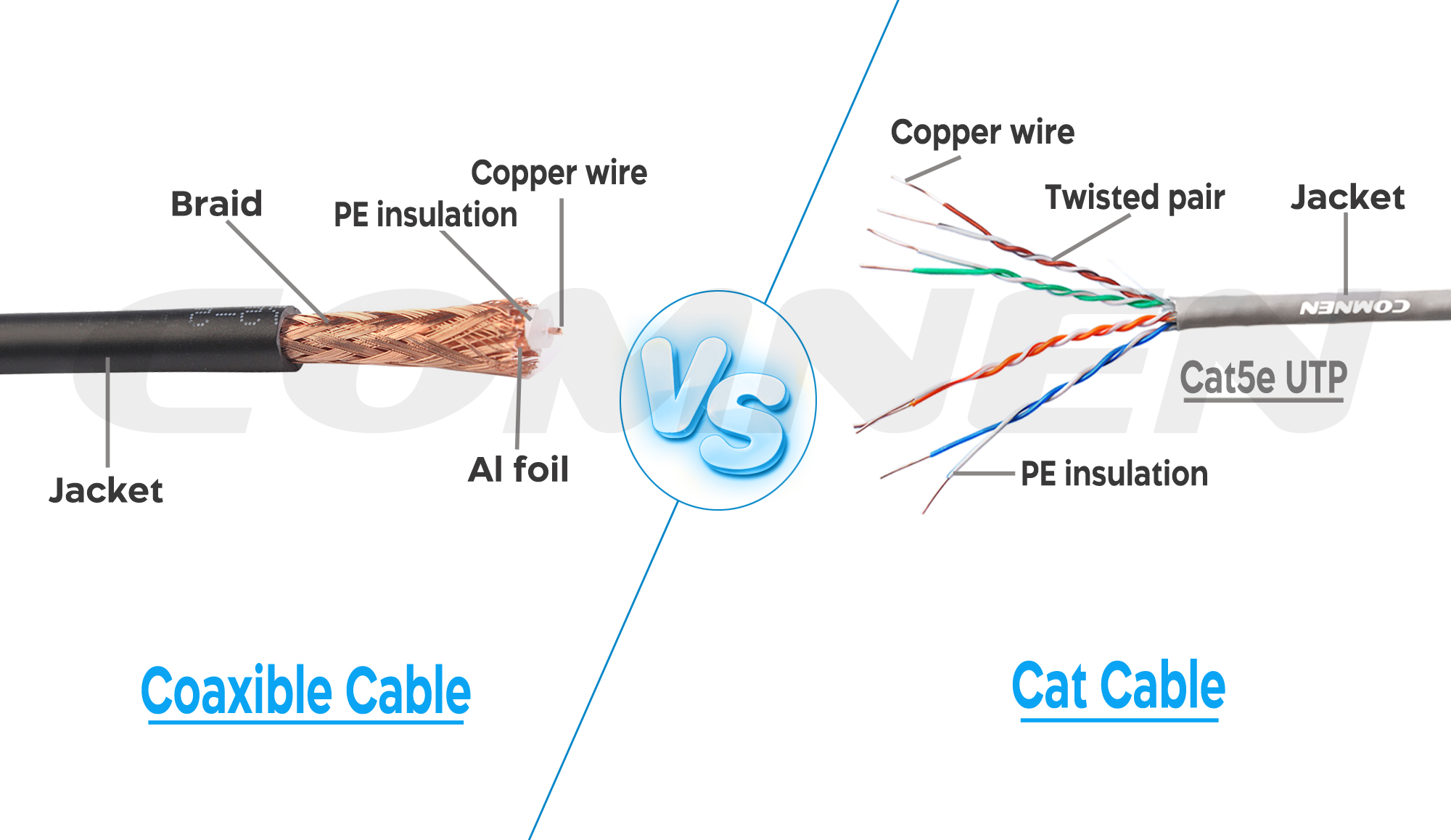 On May 22, 1973, Robert Metcalfe wrote a memo describing his invention of the Ethernet network system for interconnecting amoung advanced computer workstations, making it possible to send data to each other and high-speed laser printing. Since then the use of computers has occurred revolutionary change. Communication between computers based on Ethernet LAN has gradually changed people’s way of life. However, the communication between computers requires the use of connecting cables, and Ethernet cables have also been developed for decades. From the emergence of computer cables to the present, it can be roughly divided into two stages. The first stage is 1974-1984; the second stage is 1985-now.

In the year of 1974: Xerox PARC completes the development of the first Ethernet cable, created by Robert Metcalfe.
In the year of 1976 : The first Ethernet system finished private deployment. System upgrades culminated in 10 Mbit/s Ethernet, this is the first cable that released to the public market later. Large coax cables are used as backbone cables throughout the building and smaller coax cables are used to connect to workstations. For the following 10 years, Ethernet connections were basically using coaxial cables. 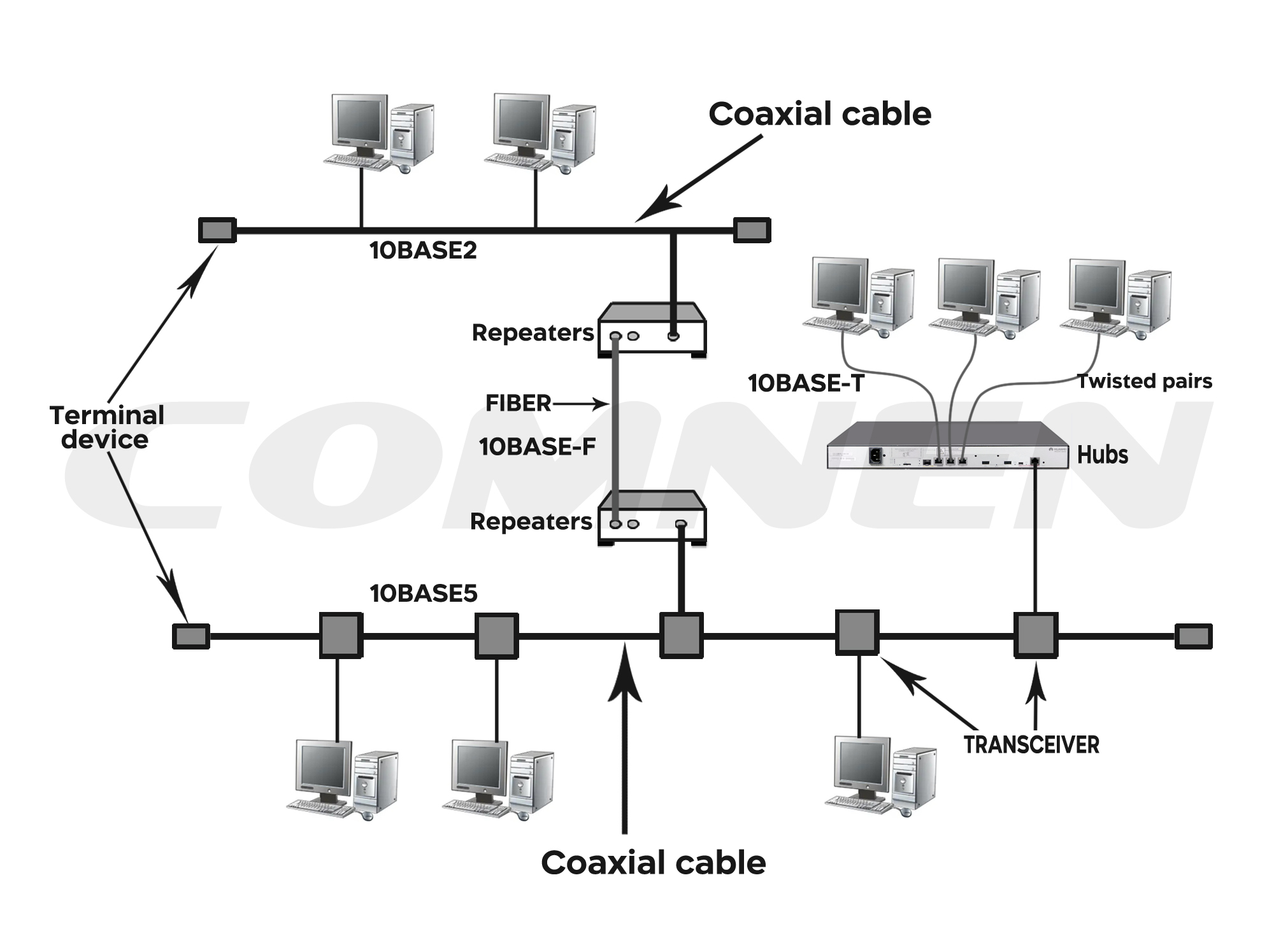 The Evolution of Ethernet Cables COMNEN 1

It wasn’t until 1985, when twisted pair wiring began to appear, that the Computer Communications Industries Association (CCIA) asked the Electronic Industries Association (EIA) to develop a cabling standard that would define a general-purpose telecommunications cabling system for commercial buildings that would support multi-product, multi- Supplier environment. In essence this will be a cabling system that will be used in all current and future network systems. By 1987, some manufacturers had developed Ethernet equipment that could use twisted pair cables, and in 1990 the IEEE released the 802.3I Ethernet standard 10BaseT (“T” refers to twisted pair cable). In 1991 the EIA and the Telecommunications Industry Association (TIA) finally released the first telecom cabling standard called EIA/TIA 568, and then the structured cabling system was born.

Category 1 network cable CAT1: Category 1 cable was introduced in 1985. It is an unshielded twisted pair (UTP) consisting of two insulated copper wires twisted around each other to eliminate crosstalk and has a data rate of 1 Mbps. Primarily used to transmit voice, such as telephone connections, it is now obsoleted by the standard.

Category 2 network cable CAT2: Shortly after the release of Cat 1, CAT2 was launched, which is also an unshielded twisted pair cable with a data rate of 4 Mbps and a transmission bandwidth of 1MHZ,  it is also obsoleted by the standard now.

Category 3 network cable CAT3: Category 3 was launched in 1991 and consists of four pairs of twisted pair wires, allowing simultaneous transmission of voice, data and video through a single cable, with a transmission bandwidth of 16MHz. Mainly used for twisted pair Ethernet (10BASE–T) recognized by the Institute of Electrical and Electronics Engineers (IEEE) in 1990.

Category 4 network cable CAT4: The launch time is uncertain, about 1991-1994, the transmission bandwidth is 20MHz, used for voice transmission and the highest data transmission rate of 16Mbps, mainly used for token-based local area networks and twisted pair Ethernet ( 10BASE-T/100BASE-T), has been obsoleted by the standard.

Category 5 network cable CAT5: it can be traced back to 1995, the transmission bandwidth is 100MHz, and can support 10Mbps and 100Mbps transmission rates (although there is a certain gap between theoretical value and reality), mainly used for twisted pair Ethernet (10BASE-T/ 100BASE-T), which is still available today, but is hard to see in new network construction.

Category 5e network cable: The standard was proposed in 2001, the transmission bandwidth is 100MHz, and the transmission rate can reach 1000Mbps in short distance. It has less attenuation and less crosstalk, and has increased near-end crosstalk power and test requirements than Category 5 cables, so it has become the most widely used network cable at present.

Category 6 network cable: Following CAT5e, the CAT6 standard was proposed in 2002, with a transmission bandwidth of 250MHz, which is most suitable for applications with a transmission rate of 1Gbps. It improves the performance in crosstalk and return loss, which is very important for the new generation of full-duplex high-speed network applications. Another feature is that a cross-shaped skeleton is added between the four twisted pairs.

Category 6A network cable: Until 2008, CAT6A cable came out, mainly used in 10 Gigabit networks. The transmission bandwidth is 500 MHz, the maximum transmission speed can also reach 10Gbps, and the transmission distance can reach 100 meters.

Category 7 network cable: The transmission frequency can reach at least 600 MHz and the transmission rate can reach 10 Gbps, mainly to adapt to 10 Gigabit Ethernet. But it is no longer an unshielded twisted pair, but a shielded twisted pair, each pair of wires has a shielding layer, and the four pairs of wires together have a common large shielding layer. This process It also greatly improves the anti-interference ability of the seven-category line. Launched around 2010.

Category 7a network cable: Compared with CAT7, the biggest difference is that the supported frequency bandwidth has been increased to 1000MHz. Domestically, Category 7 network cable has been used in very few places, and Category 7a cable has not been widely used by people, the release date is around 2013. 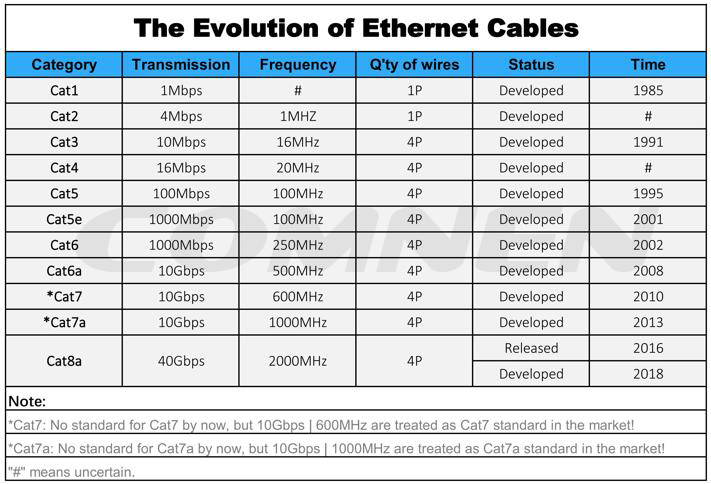 Products from this article

We will reply you in 24 Hours.